Carole Ann Alloway, Caregiver talks about the importance of co-design

In February of 2018 I got an email from Jodeme Goldhar, Executive Lead – Strategy and Innovation at The Change Foundation asking if I would be interested in speaking with her at a keynote address of ICIC18 in Utrecht, The Netherland. So many emotions and questions went through my mind as I read and then re-read her email. Excitement, honour, fear and then excitement again! I jumped in with both feet because I trust Jodeme and The Change Foundation. We have the same values and we want to make caregivers’ lives better.

I am a caregiver for my husband who was only supposed to have one operation but had 10 over 7 years and also developed heart and gastro issues. Exhausted, isolated, frustrated and alone were my emotions then, although I hid them behind a cheery smile and a ‘can do’ attitude. I was angry when I was diagnosed with depression because I felt I was a strong person. I thought, ‘how/why did this happen?’. So, I wrote a Caregiver Wishlist and shared it with Cathy Fooks, President and CEO of The Change Foundation. They invited other caregivers to contribute to the Wishlist and developed a video which has sparked more Caregiver Wishlists and videos.

But back to Utrecht. When I met with Jodeme, I had many questions – what message did we want to send? How would the talk be structured? What part would I play? Jodeme’s answer was ‘let’s co-design the talk together’. Imagine that! Someone ask-ing my opinion and giving it equal weight. Over several meetings we determined what we wanted the audience to take away with them (ensure patient and caregiver voices are heard in the work you do), what messages would be on the slides and who would speak to which part. I felt truly heard and could see that my ideas and words were re-flected in the final product. It was truly co-design. The reaction from the audience was overwhelmingly affirmative.

It’s exciting that Toronto is hosting NACIC2020 on October 5-7 and I’ve been asked to participate on the planning committee. What an honour! The next year will be hectic but I’m inspired by the knowledge and enthusiasm of the organizers. This conference will be open to patients and caregivers. Because of the great experience I had in Utrecht, I’m challenging myself to create an even better environment for patients and caregivers who attend NACIC2020. Make plans now to attend and I’ll see you there! 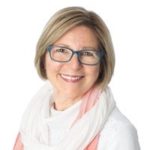 Carole Ann Alloway is a retired Human Resources Manager, mother of four and grandmother of seven. Carole Ann became a full-time caregiver for her husband, Bill, who had ten difficult op-erations within a 7-year period. In addition, Bill’s gastro issues worsened, and he developed congestive heart failure. She has witnessed first-hand the gaps in the health care and home care systems. Together with Sara Shearkhani, another caregiver, they have co-founded Family Caregivers Voice.