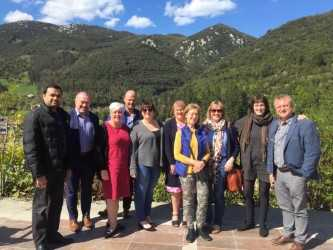 Have you ever tried to cook something outside of the dish’s country of origin? It tastes different. No matter how thoroughly you read and follow a recipe. It still tastes different. The soil, the air, the water, in essence, the elements that affect the ingredients are different. Therefore, the result is different too. Not better or worse, but not the same.

That is one of the aspects that was highlighted during the International Conference of Integrated Care in San Sebastian in April 2019. The importance of the local context in the wellbeing and health care experiences people have. And how globally accepted evidence-based best practices are challenging to adopt and adapt in specific local contexts. What is more, many times there is no evidence-based answer and there is a need to try an innovative solution. The conference gave us the possibility to exchange ideas and experiences in this matter, create a supporting network and, inspire and be inspired. A space for global cross-pollination of ideas to solve our local problems.

After the conference I had the opportunity to participate in a study tour where delegates from Wales and Isle of Man, and Basque country came together to learn from each other and share their local experiences part of the Memorandum of Understanding between the Basque Country and Wales. I was part of the facilitators team, together with Leo Lewis and Toni Dedeu from IFIC and we were privileged witnesses of the interaction.

Actually, the journey started on Tuesday, the second day of the conference, with delegates from Wales sharing some of their experiences in a room full of people even though it was very early in the morning. We learned how the Bevan Commission supported innovative initiatives to adapt the traditional way of working in Wales. Some examples included the role adaptation of workers in a Primary Health Care centre to solve staff shortage, projects to identify workforce crisis and create support and coaching strategies to help local students, the transformation of midwifery services to adapt to rural context, app development to diagnose dementia or interventions for children at risk of early language and behaviour difficulties. The audience was challenged to think out of the box, rebalance power in the system, recognise shared responsibility of the society in the population well-being and think on the concept of prudent healthcare. To sum up, to think different. “We have to change the way we think to change practice” and “if we keep doing the same things, we will get the same results”, we heard.

After the conference we visited the the Hospital of Mendaro, part of the Integrated Health Organisation of Debabarrena (Gipuzkoa) and the Primary Health Care Centre of Zabalgana in Vitoria-Gasteiz (Araba). They were two fascinating examples of adaptation to local population characteristics and demands, from rural to urban, older and younger populations, prevalence of chronic or acute diseases. Whereas Hospital Mendaro needed to focus in the long-term chronic conditions due to the aging population, Zabalgana needed to focus on acute and young population due to being a newly created neighbourhood with very marginal old population. They both had in common their effort to create friendlier and person-centred services, though.

Finally, I would like to thank to all the participants in the conference and in the study tour for their effort, their kindness and their readiness to being challenged to learn from each other. It was a great pleasure to meet you all and I loved my time in San Sebastian. I have to admit than being myself Basque, I was playing home this time. I recognised the ingredients, the tastes and the cooking with fondness as parts of my own essence. However, I am looking forward to trying new dishes, new seasonings and spices and get challenged in the following dates we have already arranged in Australia, Canada or Croatia. I am sure there will be plenty of the main ingredient I found in the past conference: passion.

Blog, COVID-19 Knowledge
Comments are off for this post.
Can we function as one system, identify with the shared values and vision, and believe that everybody can be...

Population Health and Wellbeing
Comments are off for this post.

News
Comments are off for this post.
There are many innovations in integrated care ongoing in Australia and worldwide, but most often there is a lack...

Spotlight on Learning from International Experiences in Funding and Financing Workshop

Blog
Comments are off for this post.
Here Nieves Ehrenberg, Senior Researcher at the International Foundation for Integrated Care (IFIC) provides a summary of a session...
This site uses cookies More info