Last week, IFIC celebrated its 17thInternational Conference on Integrated Care (ICIC17) in Dublin, Ireland on 8th to 10th May 2017. Co-hosted by the Health Services Executive in Ireland, the event attracted some 1200 delegates from 54 different countries with over 3,500 persons attending via the live stream.

During its Annual General Meeting, the Board at IFIC appointed its new Executive Board representatives for the next 3 years. The appointees were as follows:
• Dr Albert Alonso, Hospital Clínic de Barcelona, Chair
• Professor Mirella Minkman, Vilans, The Netherlands, Vice-Chair and Secretary
• Dr Helmut Hildebrandt, OptiMedis and Gesundes Kinzigtal, Germany, Treasurer (re-appointed)

The IFIC Board also gave a vote of thanks to Professor Guus Schrijvers, who stepped down from his role as IFIC Chair after 6 years. As the co-founder of IFIC in 2011, and the founder and first editor-in-chief of the International Journal of Integrated Care in 2000, a gift of appreciation was presented to Professor Schrijvers by the new Executive Board during the conference dinner. 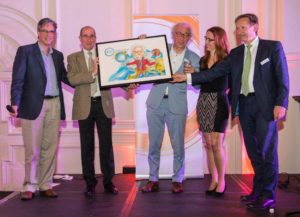 Dr Nick Goodwin, IFIC’s Chief Executive Officer, commented “Over the last year our Foundation has grown in strength financially as our international membership and work activities have grown. Here in Dublin we have celebrated our largest event so far and significant momentum for change has been generated. In the coming years there will be many new and exciting opportunities for IFIC to work with its members and partners internationally, and I look forward to rising to the challenge that represents. I very much look forward, then, to working with the newly appointed IFIC Executive Board, and all IFIC’s staff and associates, in the future.”